Posted on November 23, 2015 by doesnthavetobethisway

This is a refrain that many trans people hear with some frequency. I don’t know how to respond when people tell me this.

I am brave the way someone might run through a field of thorny rose bushes to escape a forest fire. I’m just trying to live my life.

At work the other day, we were having a social event that involved a trivia quiz about various lab members. One of the questions was something like ‘Which of the following people is about to have a baby?’ One of the people listed was a guy. Someone yelled across the table, “Hey Joe* are you about to have a baby?” People laughed at the idea that a guy might be pregnant. [*Joe is not his actual name.]

I felt alone and disconnected. After all, I have a uterus, and testosterone does not eliminate all risk of pregnancy by itself. I could have spoken up about the existence of trans people, and the reality of men who have babies – I wouldn’t have even had to out myself as trans – but I remained silent.

To be brave would have been to have spoken up in that moment, and to have stood up for myself and all of my other trans siblings.

This man is wearing ‘period panties’ from a company that’s apparently paying attention. Click the image for more about these particular panties.

Instead, I imagined the awkward silence, awkward follow up jokes, and suggestions that I was being too serious, and I felt discouraged. I imagined the end of my success as a scientist, the loss of the connections that I did have, and I chose to maintain my sense of safety.

I have replayed that scene in my mind several times, going over what might have happened if I had chosen that moment to come out as a man equipped with an all natural baby-making machine. I don’t really know. But chances are, no one would have assaulted me, or murdered me, or even started looking for ways to legally fire me. There would be some awkwardness, and then life – and science – would carry on anyway. What an incredible privilege it is that I wouldn’t have to fear for my life or well being. Someone might even call me brave.

But bravery is when we choose to do something that we didn’t already have to do.

I’m not saying that I have not had to do things that require courage in order to be my whole self. I might even argue that doggedly pursuing wholeness and self-actualization is an act of courage all by itself. But when a cis person calls me brave for being trans, I feel like they are missing the part where I didn’t really have a choice. This is just who I am, and I would rather be covered in rose thorns than lost to a forest fire. 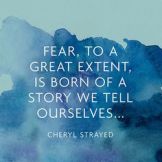 I cannot go back in time to that moment at the lab social event and choose a different response. I cannot even promise that next time I will get it right, because that would be disingenuous – I am still lost in fear. I am, however, committed to continuing to reframe what ‘safety’ means in my life, and to let go of fears that aren’t actually keeping me, or anyone else, safer.

Paraphrasing a quotation from Cheryl Strayed, fear is just a story we tell ourselves.

We can change that story.